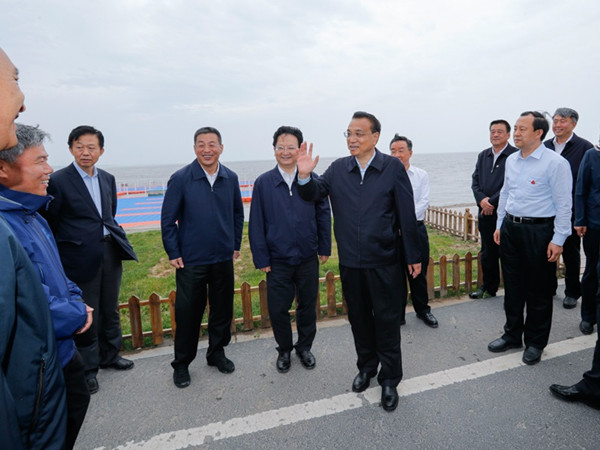 Premier Li Keqiang highlighted on Wednesday the crucial role of reform and opening-up in revitalizing old industrial areas in Northeast China, saying that the region must attract talent and technology to boost its attractiveness to businesses.

Speaking with foreign business leaders during a fact-finding trip to Jilin province, the premier extended an invitation to more small and medium-sized enterprises to invest and start new businesses in China, pledging that the nation will provide a level playing field.

Li was on a two-day tour, visiting Songyuan on Tuesday and Changchun, the provincial capital, on Wednesday.

Jilin is one of China's most important grain production areas as well as a manufacturing hub for automobiles. The region, which used to rely overwhelmingly on heavy industry for growth, has struggled to maintain its development momentum in recent decades with young people leaving the province.

Jilin's economy grew by 14.9 percent year-on-year in the first quarter of this year, compared with the national average of 18.3 percent over the same period.

Li urged the province to continue expanding opening-up to Northeast Asia and to improve its competitiveness in markets in the region and around the world.

At a subsidiary of Panpan Foods, a leading processor of agricultural products based in Fujian province, Li commended the company's decision to expand its investment in Songyuan.

He underlined the importance of a good business environment to attract more investment to Northeast China, saying that the company should convey greater confidence to its peers that the region not only boasts a good investment environment but also good potential for growth.

Li also visited Chagan Lake in Songyuan, a national nature reserve that has become a tourist attraction in recent years due to its winter fishing traditions that date back about 1,000 years.

He praised the lake's rich ecological resources, saying they played a key role in improving the ecology of surrounding areas.

It is important to make persistent efforts to protect the environment before undertaking orderly efforts to develop tourism, he added.

The premier also spoke with founders of startups at a business incubator in Changchun, where he inquired about the difficulties their businesses faced and the support they hoped to get from the government.

He pledged continuous support measures to smaller firms for their financing procedures to maintain their vitality and growth momentum.

Li encouraged the incubator to give full play to the strength of every startup and help them get through their difficulties to create more successful firms.