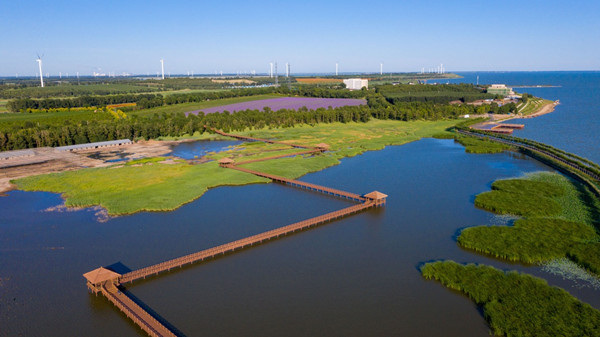 Northeast China's Jilin province has been making progress in increasing its greenery by issuing a range of different policies, according to local media reports.

At present, the province has completed 176,600 mu (11,773 hectares) of artificial afforestation, which is more than half of its annual target.

Some 95 percent of the task of constructing 120,000 mu of farmland shelterbelts in Lishu county has been completed. Following a specific analysis of the local climate and natural conditions, Lishu county has innovatively adopted a "grouting" planting method: first watering, then cultivating the soil, and finally planting saplings.

This year, Jilin will implement eight major projects including the Changbai Mountains Forest Vegetation Restoration Project and the Forest Quality Accurate Improvement Project. In the next three years, the province will complete the construction of 775,800 mu of farmland shelterbelts.

Since the beginning of this year, Meihekou has developed 30 voluntary tree planting bases and proposed to invest 800 million yuan ($124.24 million) over five years to increase its forest coverage rate to 40 percent.

As the main site for afforestation and greening in the province, the western part of Jilin closely integrates relevant measures with rural revitalization and is vigorously developing "economic forests".

At present, the seabuckthorn industry project in Da'an city is under preparation, and related supporting deep processing enterprises will be put into operation in November this year.