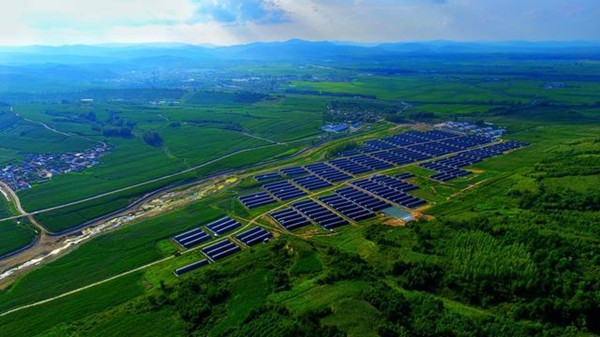 An overview of the phellinus igniarius plantation, outside Helong city [Photo/cnjiwang.com]

Northeast China's Jilin province sees the development of digital villages as the strategic direction for its rural revitalization and is reportedly promoting smart agriculture and livestreaming on the internet of its goods, among other high-tech initiatives.

Before spring ploughing this year, Lishu county in Jilin invested nearly 5 million yuan ($771,000) to build 41 wireless agro-meteorological monitoring stations, with an average of one for every 100,000 mu (6,667 hectares) of farmland.

The data is collected at the county's black soil protection and monitoring center. There are 304 natural villages in the county, with each village now having its own fertilization report.

On slopes, hillsides and sandy land, suitable planting times are being introduced according to local conditions. In addition, drones will be dispatched to help at critical times.

A farm hand gently holds a specimen in the phellinus igniarius plantation in Bajiazi town. [Photo/cnjiwang.com]

In a plantation for phellinus igniarius – a fungus used in traditional Asian medicine  – located in Bajiazi town, Helong city, the extensive application of technology is yielding results. The use of an information of things monitoring cloud management system, as well as precise controls for temperature and humidity, is said to be providing a suitable growth environment for the crop and is helping to expand productivity.

In the current year, Helong city has established a three-level logistics distribution system at the county, township and village levels and 76 village-level e-commerce service stations to drive rural economic development.

In the first quarter of this year, the volume of e-commerce transactions for agricultural and associated products in the city – including rice, sanghuang and spicy cabbage – was worth 140 million yuan.

This year, Jilin province will focus on efforts to advance the upgrading of its industries, the digitalization of information services and the development of internet plus rural government service platform projects.